Overview: This book came out in the middle of an uninterrupted 12-month run of Fifth Doctor novelizations.  Following the publication of Meglos in May 1983, there wouldn’t be another non-Davison book until The Dominators in July 1984.  Five of the ten Davison books released in this time frame would be by Dicks.  While episode writers like Peter Grimwade, Steve Gallagher, and Barbara Clegg would all get to adapt their own scripts, Kinda author Christopher Bailey did not.  As a direct result, one can now say with a straight face that Kinda is weaker than The Dominators.  As long as you’re talking about the books.

The original episode: One of Doctor Who‘s more complex scripts, Kinda is layered with numerous cultural and philosophical allusions, largely drawn from Buddhist thought, Christian mythology, and Freudian and Jungian psychology.  The BBC’s own website helps sort through the details.  The recent DVD release explains that the story began with scriptwriter Christopher Bailey as a means of sorting through recent Buddhist learnings; the Christian influence was added on by the production team; and the psychology seems to have been an unconscious addition, as none of the story’s creators, editors or producers mention it at all on the DVD.  Perhaps the Mara itself left it there.  At any rate, all this could have given rise to one of the most beloved novelizations of all time.  Had it been commissioned by Peter Darvill-Evans during the end of the novelizations’ run, it may well have been. 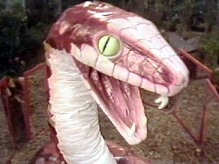 In Print: … instead we got this.  I’m sure Terrance Dicks knew, as he set down to adapt the story, what the story was about.  After all, he was Barry Letts’ right-hand man for five years, so the Buddhist material should have been somewhat familiar.  Unfortunately, the end result is a straight-up adaptation of the televised episode, with Dicks neither adding to nor taking away from what we see on screen.  The three characters in Tegan’s Mara-haunted dream sequence, who are given representative and symbolic names in the script that aren’t spoken on screen, remain anonymous in the novelization.  The recent DVD release dropped some tantalizing hints about what was in Bailey’s original script, gave us 14 minutes of deleted scenes from Parts One and Two (both of which were greatly over-running), and let us know exactly which scenes in Part Four were expository padding added, months later, at Eric Saward’s insistence (as if we needed any help figuring that out).  Dicks, working evidently from the final product rather than from the original scripts, doesn’t include the deleted scenes, but does include all the padding.  In short, this version of Kinda is a lot less Bailey and a lot more Saward.

The Regulars: The DVD notes inform us that Matthew Waterhouse wanted to add some empathy to the character of Adric, notably in the scene where he inadvertently wounds Aris, a character who was at the time under the Mara’s possession.  However, Saward’s had different ideas for the character.  In the padding scenes, Adric comes across as thoughtless, indifferent, and argumentative.  All this is carefully preserved in the novelization.  Unfortunately.

Meanwhile, Tegan’s dream sequence — which in Bailey’s original formulation was meant to represent an internal struggle with her own personal demons (rather than external force as the Mara wound up being on TV), and which on screen contains warped representations of the TARDIS and her three travelling companions — remains just a dream sequence, without any of the intended symbolism.

The Chapter Titles of Death: Chapter 1 is called “Dangerous Paradise”.  I think there’s a Coolio song waiting to happen in there.  Chapter 9 is “The Wheel Turns”, one of the book’s few nods towards the story’s Buddhist roots.

The Cliffhangers: Like most other Dicks novelizations of the time, this one is a square structure: 12 chapters in the book and episode cliffhangers at the end of 3, 6 and 9.  The rather abstract cliffhanger to Part Two is far more concrete in the book, a single-sentence paragraph: “He opened the box”.  The rapid cutting of the Doctor’s vision that closes Part Three does at least have a pleasingly staccato representation in the book.

Good prose/bad prose: Terrance seems to open Chapter 1 on a note of sarcasm: “No doubt about it, Deva Loka was Paradise.”  Commander Sanders is rather redundantly described as “a grizzled, grey-haired veteran“.  However, the innate cleverness of Bailey’s script cannot be suppressed; the book’s first line of proper dialogue is “What’s wrong, boy: Bad dreams?“, which nicely foreshadows the main plot.   A long dialogue exchange in Chapter 3 dispenses entirely with “he said/she said”, thus getting the Tom Stoppard cadence down pat.  In the best bit of prose in the book, the Doctor observes: “it was hard to take in the subtle complexities of an alien culture, particularly when you were being led through the jungle at a run.”

Personal memories: I was very confused, at age 11 or 12, by the moment in Chapter 2 when the Kinda decorate a sleeping Tegan with fruit and flower garlands, and then “turned and melted away“.  For the longest time I took this to mean that the Kinda possessed the ability to actually disappear into thin air, until it was pointed out to me that this was just an idiom.  Come to think of it, the story would have benefitted no end from the Kinda actually being invisible…

Final analysis: Even when Terrance Dicks phones it in, the end result is usually snappy and enjoyable.  This worked fine for Terrance’s other Season 19 adaptation, Four to Doomsday.  It does not work here.  An adaptation of the original scripts, rather than the episode as aired, might have been more memorable.

An incredibly languid sojourn through the "Doctor Who" canon, with illustrations from the Topps 1979 baseball card set.
View all posts by drwhonovels →
This entry was posted in 5th Doctor and tagged Adric, Doctor Who, Fifth Doctor, Mara, Novelizations, Nyssa, Target, Tegan, Terrance Dicks. Bookmark the permalink.