You wouldn’t think there would be a whole lot to discuss here, honestly.  The Rescue, the first story produced in Doctor Who‘s second production season, is essentially a two-part filler episode designed to introduce Vicki, the replacement companion for Susan.  Meant to be in her mid-teens, like Susan, but played by an actress in her early 20s, like Susan, Vicki was a diminutive blonde from the late 25th century who’s been shipwrecked and orphaned on the planet Dido.  Now you know why the story’s called The Rescue.  All but one of Vicki’s crew has been killed in a mysterious explosion, as has the entire race of native Didonians.  This sets up a murder-mystery which has exactly one suspect, which means that there’s also a Scooby Doo-style reveal in the final minutes.  In the middle of all this, the Doctor incorporates a sprightly checked cravat into his wardrobe for the first and, one would hope, the last time.

The Rescue, slight as it seems, has not been elevated in print the way other early Doctor Who stories have been.  Ian Marter wrote most of the novelization before his way-too-early death.  The editor for Target at that point, Nigel Robinson, finished the book (about which more later) and claims to have removed a lengthy passage of Marter’s extolling the virtues of, um… well, just follow the link and check for yourself.  In another unfortunate sidebar, esteemed Doctor Who historian Adrian Rigelsford once misspelled the name “Dido” in an embarrassing way in one of his, um, lesser-researched reference books, as lovingly detailed in the first paragraph here.  In other words, if you only know about The Rescue from reading about it in old books… you probably wouldn’t want to know it any further.

Following a six-week vacation, the first thing William Hartnell does in this story is nap through the first 10 minutes.

There’s actually a lot to like about The Rescue, though, which surprised me, as I’ve never spent much time thinking about it before.  The TARDIS doesn’t show up until four minutes have elapsed in the story, and when it shows up, we’re treated to an intentionally awkward scene in which the Doctor, bereft of Susan, is literally asleep (a series rarity) and in which Ian and Barbara are clearly uncomfortable having to deal with him without Susan present as intermediary.  The first appearance of Koquilion, the story’s decoy villain (in the Scooby Doo-style mask) is also pretty striking, as he enters to strobing lights, and the sounds of Tristam Cary’s discordant score (recycled from The Daleks).  Maureen O’Brien delivers her big Episode 1 monologue directly into the camera, a directorial trick which the show at this point in its history reserved for its most important moments.  And the Episode 1 cliffhanger is, for the first time, a literal cliffhanger, with Ian teetering on the precipice of a (gentle three- or four-foot) cliff, with Sandy, the slavering Sand Beast, lurking below and looking very hungry.

Of course, the cliffhanger, like a few others from the previous season, turns out to be an elaborate ruse.  We learn, moments after Barbara murders it with a flare gun, that Sandy is a good monster, a vegetarian and Vicki’s loyal pet, and that Ian was never actually in any danger.  The animal’s death is thus a shocking, unprecedented moment in the show.  This leads to a whiny and petulant scene for Vicki, complaining about how the TARDIS crew have ruined her already precarious situation on the planet (also in the context of Ian making an unfortunate play on Koquilion’s name, calling him “Kocky-lickin'”… eww).  But the whininess and petulance is important; it allows Hartnell, whose character was on the ropes in Episode 1, to save the second half of Episode 2 with a tour-de-force performance, as he monologues his way through unmasking Koquilion, and then swoops in like a surrogate grandfather to rescue Vicki, both emotionally and from the planet.

Vicki’s two defining character traits were A) being from the future and B) giving goofy names to bug-eyed monsters. In this story, she proudly exhibits both traits.

These final moments show off Hartnell at his best in a way we hadn’t seen before, if you’re watching the show straight through.  During Season 1, a significant portion of which he was still an anti-hero, the Doctor didn’t do a lot of squaring off against humanoid villains.  He didn’t have a climactic showdown with Tegana in Marco Polo, and his confrontation with the human commander in The Sensorites was more along the lines of gentle psychotherapy.  When he told off Robespierre in The Reign of Terror, he did so in the opening moments of a middle episode, and not as an actual plot point.  So, in this story, once he’s unmasked Koquilion to reveal Bennett, Vicki’s last surviving shipmate, as the person who killed off the rest of the crew and all (but two) of the native Didonians, it’s really Hartnell unleashed in all his righteously angry glory for the first time in the show’s history.

Hartnell was at his best when his character was allowed to seize the moral high ground, and his assertion here, “You destroyed a whole planet to save your own skin – you’re insane!”, certainly made me want to go grab the lapels of my frock coat and insult my own reflection in the mirror.  Bennett (the Australian Ray Barrett, probably cast just as much for his impressive C.V. as for the fact that his last name nearly matched his character’s) plays the scene pretty richly, too; for most of the story, Bennett is confined to his bed and/or snaps at Vicki, so this is really his one scene to let loose and square off against the inimitable Billy. 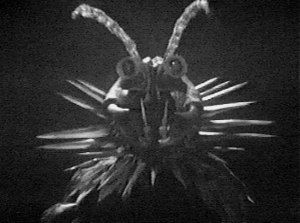 Although he had to do so in THIS costume…

Although the story is short and easy to overlook, Whitaker does insert some unique points into the script.  This is the first time, for example, that the Doctor solves the plot (identifying Koquilion as an interloper rather than a Didonian native) because he’s been to the planet before and has information about the local culture that the audience doesn’t have.  There’s also a lovely bit of teasing between Ian and Barbara, after Vicki learns that they’re from the 20th century and calculates that they must now be 500 years old.  Vicki by the way, implies that time travel already exists in the year 2493, where she’s from.  In the next story, The Romans, she’ll imply that she obtained a medical degree while in grammar school, although never again in her tenure on the show would she be called on to show off this knowledge…).

One point about this story which is almost certainly unintentional.  Every time the TARDIS was seen to materialize on screen during Season 1, it did so silently; if the famous “wheezing, groaning” sound was heard, it was only inside the console room.  It is only after the Doctor throws his own granddaughter off the ship that the TARDIS begins to arrive in the noisy way that we know and love today.  There is probably a profound point to be made about this, especially as River Song drops a throwaway line in the new series about how the TARDIS simply isn’t supposed to make that sound.

But, Maureen O’Brien tells us, this is not the time for profound thoughts… good night now.

Oh, and I promised you a postscript about Nigel Robinson.  The TV story ends with the last two surviving Didonians driving Bennett to his death, and then wrecking the spaceship’s comms unit so that the Earth rescue vessel can’t land.  Great, you think.. after Bennett destroyed their entire civilization, these last two Didonians can live in peace.  But in the novelization, at least, we’re told that the Earth rescue craft arrives anyway, and kills the Didonians.  Um.  Wow. Thanks for that, Nigel.  Please don’t ever do that again, thanks.  Send me postcards if you have a convincing explanation as to why that was a good idea and, if I like your answer, I’ll send you my copy of the novelization… my only copy.

An incredibly languid sojourn through the "Doctor Who" canon, with illustrations from the Topps 1979 baseball card set.
View all posts by drwhonovels →
This entry was posted in 1st Doctor and tagged 1st Doctor, Barbara, David Whitaker, Doctor Who, Ian, Ian Marter, Nigel Robinson, Novelizations, Target, Vicki. Bookmark the permalink.

4 Responses to The Rescue