Who’s 50: The 50 Doctor Who Stories to Watch Before You Die 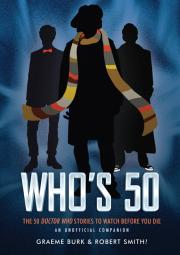 So it’s a Saturday night in Brooklyn and the Mets game has been in a rain delay for hours and the TV station has already burned through Mets’ season highlight films from 1971, 1973, and 1981.  After my mind was numbed by the funky ’70s background music, and the parade of horribles who made up the ’81 Mets roster, it was time to turn off the broadcast, and get back to my ever-growing Doctor Who DVD backlog.

And there, thankfully, on the Special Edition release of The Ark in Space, was a 27-minute documentary on the history of original Doctor Who novels published between 1991 and 2005.  Many of the Virgin Publishing’s New Adventures and BBC Books’ Eighth Doctor Adventures have, to be charitable, not aged very well, but they did more than anything else to help lay the foundation for the revived Doctor Who TV series — lending authors (Paul Cornell), story concepts (the destruction of Gallifrey), and actual episodes (Human Nature).  Plus, the documentary is fun; Mark Gatiss and Russell T. Davies read excerpts from their first books, Rob Shearman is witty and insightful as usual, and Gary Russell gives an acerbic and contrarian interview, while sat in front of a double-monitor display featuring the cover of perhaps the most derided novel ever written, Divided Loyalties.  Take that, Constant Reader! 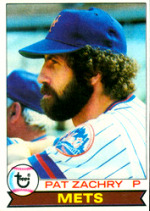 Pat Zachry’s 1979 Topps baseball card. Pat has nothing to do with Doctor Who, but does kind of have the Rob Shearman look going on.

So if not for the New Adventures, we might not have the Doctor Who TV revival, and if not for the revival, we certainly wouldn’t have the great non-fiction books that have sprung up around the series.  Last year saw the release of Who Is the Doctor, one of the best episode guides you’re ever going to find – wide-ranging, funny, literary, and really really large.  Now, in time for the show’s looming 50th anniversary, comes the follow-up tome by the same authors: Who’s 50: The 50 Doctor Who Stories To Watch Before You Die.

What Who’s  50 is not, is another episode guide.  Instead, it extends the Who is the Doctor format all the way back in time to 1963, and selects (in what must have been a particularly difficult challenge for authors Burk and Smith?) 50 unique, memorable, quirky, or just plain you-have-to-see-it-to-believe-it stories from the show’s long, long run.  If you read all the entries in order, the book does tell something approximating the complete history of Doctor Who, via a not-quite-greatest-hits format.  And what a ride that is.

In treating both Classic and New Series Who as one ongoing concern, Who’s 50 is remarkable in how it handles the run of the show with respect and deference all around.  It would be too tempting to write a book such as this while smirking at the very dated special effects or staging of the classic series, or, from a classic perspective, to roll your eyes at the emotional excesses of the Russell T. Davies era or the timey-wimey hand-wave plot resolutions of the Steven Moffat years.  Instead, both Burk and Smith? show equal respect to both halves of the show history.  This would seem like a small point, but one that seems to elude most Internet-based critics of the series – those who complain that the classic series stories were “two episodes too long” or that the new series is “too soapy” or “doesn’t make any sense”.

So what sets the book apart, right from the beginning, is the “Tips for Newbies” that heads the chapters on the ’60s, ’70s and ’80s.  I’d argue that these are tips even for established fans, not just newbies.  There’s great practical advice here, including “When all else fails, watch what William Hartnell or Patrick Troughton is doing.”   With this advice, even the worst Doctor Who stories have a whole lot of merit to them.

And  just because I haven’t had time to blog about this monstrosity yet, doesn’t mean I can’t take a gratuitous jab at it now…

Another element setting Who’s 50 as one of the great Doctor Who books is its story selection.  When you’re only picking about 25% of the series’ total output, the selections and necessary omissions are obviously going to annoy some reviewers.  That said, Burk and Smith? do an amazing job picking not just the obvious landmark stories, but also fill out their list with some worthy but overlooked choices.  For example, they select three legendary stories from the very first season (1963-1964), but then pick two less-obvious choices from Season 3 (The Gunfighters and The War Machines) to round out their survey of the Hartnell era.   And this showcases the authors’ strengths; while much of the entry for each story is made up of historical context and obvious high/low points, their individual episode reviews show real print chemistry; for example, as with the latter two stories, when one author loves a story and the other does not, their bickering byplay is a delight to read (with some squabbles over an episode’s quality carrying over into the nest few reviews as well).

Most of the Troughton era output has been destroyed by the BBC, but the authors still select three of the seven surviving serials, an impressive percentage.  They also pick three of the four stories from the show’s format-shattering Season 7 (leaving out, unfortunately,  my favorite of those four, the much-underlooked Ambassadors of Death), and then only three more stories from the balance of the Pertwee era after that.  Similarly, for the Tom Baker years, it seems that nearly every episode from Philip Hinchcliffe’s three-year tenure as producer gets an entry  – and not a single one of those can be argued with.  The inclusion of Horror of Fang Rock is also inspired, with the authors admitting that while it’s not the best story ever made, it’s a terrific example of even generic Doctor Who.

And that’s not the only somewhat-overlooked classic given full credit in Who’s 50.

While a lot of the factual information presented about the individual stories in Who’s 50 (mostly presented under the heading “Interesting Trivia”, or in one of the several interstitial essays spread throughout the book) is fascinating, it’s again the author byplay that makes this book stand out more than similar efforts printed in the past.  Burk’s review of The Mind Robber quotes liberally, as does the original story, from Gulliver’s Travels.  Smith?’s review of Logopolis is an unabashed love letter to mathematics.  And, because both authors review each story, some of their rebuttals to each other are flat-out hilarious.  There’s hardly a boring moment to be had.

Very little of the Colin Baker years are covered, thank goodness, while exactly half of Sylvester McCoy’s twelve stories are featured.  Quirky choices from this latter era include Delta and the Bannerman (like The Gunfighters, derided for far too long as one of Doctor Who‘s worst moments, when it’s not, not really) and The Happiness Patrol (where, again, the authors engage in heated disagreement over just how good it really is).  Once we reach 2005…. well, Burk and Smith? have already written a book about the new series, so their entries for Rose on down are somewhat truncated – but still manage to present fresh takes on the selected Davies- and Moffat-era stories, even beyond what they’d already offered in last year’s tome. 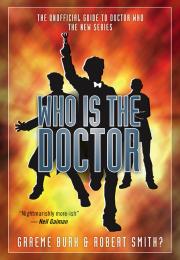 Read this one, too.

Doctor Who, thanks to the novelizations and the New Adventures, is very much a print phenomenon as well as a televised one.  Even its reference books manage to be excellent.  Who’s 50, like Who is the Doctor, is no mere recitation of plot details and cast/crew lists, but rather is opinionated, argumentative, funny, and surprising.  It does stand on the shoulders of some of the groundbreaking 1990’s-era Who non-fiction, such as The Discontinuity Guide (which Who’s 50 acknowledges and occasionally quotes from), but also innovates rather than imitates.  When you’re making up your must-watch episode list for your personal 50th anniversary viewing parties this coming November 23rd, you could do a lot worse than to consult Who’s 50 for inspiration.

Final note: No review of Who’s 50 would be complete without snarking on one of the stories selected for this book but which, in the given reviewer’s opinion, just should have been left out.  So, it’s incumbent upon me to say… nyahh, Carnival of Monsters is just terrible.  So, make that Who’s 49 … and see you next time. 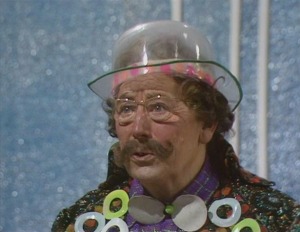 Thanks to ECW Press for the advance copy.

An incredibly languid sojourn through the "Doctor Who" canon, with illustrations from the Topps 1979 baseball card set.
View all posts by drwhonovels →
This entry was posted in General. Bookmark the permalink.

3 Responses to Who’s 50: The 50 Doctor Who Stories to Watch Before You Die