Posted on October 4, 2013 by drwhonovels

When you’re watching Doctor Who in sequence, one episode a night, it takes you about two months to get to The Romans.  In that time, you’ve followed this crazy little show backwards in time, to visit cavemen and Robespierre, and far into the future, to see 25th-century spaceships and, uh, 28th-century spaceships.  You’ve even been shrunk roughly to the size of an inch.  What you have not seen, however, is bedroom farce.  So nothing that’s come before has quite prepared you for… this.

The first episode of The Romans, called The Slave Traders, almost but not entirely lets you in on the joke that’s coming.  Having fallen off a cliff at the end of the previous story, the TARDIS crew have wound up in a villa outside of Rome in the year 64 A.D.  Most of the episode features the travelers luxuriating in a rural villa, with only large meals and trips to the marketplace to keep them occupied (one never learns, of course, if the Doctor is there by permission of the owner).  Ian and Barbara famously act post-coital in one sequence, after the Doctor and Vicki leave them behind to go visit Rome.

And then begins the sequence of mistaken identities and deliberately outlandish coincidences that launches the next three episodes, the ones that nothing before in Doctor Who have prepared you for… if I were to tell you that the Doctor is mistaken for a lyre-playing assassin and is subsequently ensnared in a web of mayhem and intrigue, that would just barely begin to describe what happens next.

Because even at the fringes of The Slave Traders were some black-comedy elements, even more so than we saw in The Reign of Terror.  The two slave-traders who capture Ian and Barbara by story’s end are actually funny, or as funny as slavers can be, such as when they continually ply a market stall-holder with coins until she coughs up everything she knows about the TARDIS crew.

So, what comes next?  In the opening moments of All Roads Lead To Rome, the Doctor clonks a villain on the head.  Fan mythology has built up that Hartnell’s vaguely menacing a supine caveman with a rock in The Tribe of Gum was a one-off “dark” moment for the character but, really, smashing people on the head is simply his defining trait, even midway through Season 2.  The  script also tells us that the Doctor learned the fine art of fisticuffs from “The Mountain Mauler of Montana” (of whom, sadly, we never hear anything else). 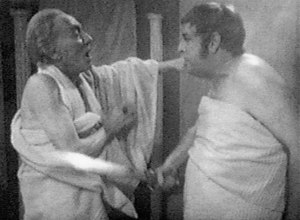 There’s something I’ve been saying for a number of years now. “There is just not enough shirtless William Hartnell cosplay in the world.” And it gets truer every time I say it.

But that’s nothing compared to Barbara’s fate.  Dennis Spooner, as he did in Reign of Terror, quickly locks her in a jail cell, where she’s leered at by nasty men who proposition her in exchange for the key.  Later, Barbara is sold into the household of Caesar Nero, who spends much of the final two episodes running around after her in order to, you know, do the whole comedy rape thing.  Fortunately, Nero has both a stumbling problem and an overly protective wife, so nothing bad ever happens to Barbara and you still get to enjoy the over-the-top nature of Derek Francis’ performance as Nero.

So there’s the odd mix.  With the raping, and the slave-trading, and the poisoning (there’s a small role for Anne Tirard playing Locusta, the first of two witches she’d play in Doctor Who), you have a large number of historical atrocities played for farcical comedy.  And then there’s Tavius, Nero’s kindly butler  and slave-buyer.   One of the “twists” at the end of the story is that Tavius is actually an early Christian who helps free Barbara from bondage.  In this role, Tavius engages in just the sort of love-thy-neighbor activities you’d associate with early Christians in the year 64 A.D.: murdering a centurion and hiding the body in the apodyterium (“the apody-who?” “the apodyterium!”).  So someone didn’t properly think that through, but Michael Peake has a remarkably lugubrious face and a resonant voice (and looks like a young Telly Savalas), so, again, the odd interplay between farce and tragedy works anyway. 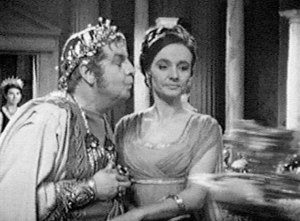 “Open your mouth and close your eyes / And you will get a big surprise!”

The Doctor’s first encounter with Nero is side-splittingly funny, again in a way the show hasn’t attempted before.  There’s that business with Nero’s footstool on which the Doctor repeatedly attempts to sit, and the bonus Hartnell fluff of the word “impossibility” (“That, my dear sir, would be an impossibissity!”).  Vicki insults Nero in Latin, which escaped me the first ten times I saw this story.  Later, the Doctor and Nero enjoy a shirtless sauna session together, and the Doctor can’t stop pointing his sword in Nero’s face (not that sword… the other one).  After Vicki tries to slip Nero a poisoned chalice, Nero then engineers the series’ first comedy death, as he hands the drink off to a bumbling servant who promptly drops dead.  Nero shrugs this off comically, and then puts a protective arm around Vicki as he blusters “If only I could lay my hands on whoever’s responsible!”… which, of course, he is doing at that exact moment.  And as for Hartnell’s mute lyre-playing before Nero’s court… comedy is timing and Hartnell’s timing is impeccable.

While Barbara is threatened with slavery and rape, and while the Doctor and Vicki innocently stumble into their mistaken identity/assassination plot (as you do), Ian is forced to fight in the arena.  He’s paired with fellow slave Delos (well played by then-resident Who stuntman Peter Diamond, who’ll pair up again with Ian in The Space Museum later this season).  The two survive a shipwreck from a galley slave ship, and manage to not kill one another in the arena.  This friendship is oddly straightforward and touching compared to the rest of the story, although Donald Cotton managed to rectify that problem in his novelization 20 years later. 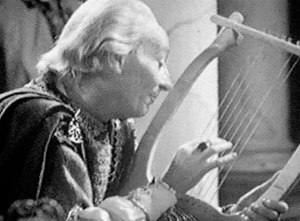 “We sing in praise of total war.”

The direction, again by Christopher Barry, who gave us most of The Daleks, is fairly a work of genius given the miniscule budget and cramped studio space.  Check out the shipwreck scene, as the in-studio slave-galley is swamped by storm waves and then capsizes.  The Episode 2 cliffhanger – stock footage of lions – is our second feline-face cliffhanger this season.  The arena fight between Ian and Delos is all done live-to-tape on a single studio camera, and the fact that it looks so effortless puts all credit on Barry (and Peter Diamond).  There’s also the gold bracelet that Nero gives Barbara – this is a very early bit of arc-building, as the bracelet only becomes important in the next story after this one.  There is even, in Episode 4, what appears to be a screen-wipe, and very complex sound and music effects superimoposed over the montage of burning Rome (which, again, all had to be realized live in studio, with no post-production edits).

William Hartnell, in case I haven’t said it enough yet, really shines in The Romans.  He’s always sounded awkward or stilted in the past when forced to deliver technical explanations, but in this story he gets clever rapid-fire “real” dialogue in all four episodes, and stands as the main character in a way he really hasn’t done before.   His running verbal circles around Ian in the first episode, in the first villa scene, really has no equal in the series to date.  He looks great in his court robes, and his dialogue is mesmerizing in spite of the fluffs.  His repeated puns about lions, in a speech to Nero, who wants him thrown in the arena, still make me laugh, even though I haven’t been in the fourth grade for about 30 years now.  Maureen O’Brien as Vicki, however, has gone from playing a 17 year-old in The Rescue to playing basically an 11 year-old here.  It’s a bit disconcerting.

Two actors at the heights of their powers. Obviously there is a massive height differential…

More random brutal moments from this story: Nero casually killing a guard early  in Episode 4; Nero swearing that he will have the Doctor killed “over and over again!”, when the Doctor sets fire to his plans for New Rome… thus giving him the impetus to start the Great Fire in the first place; and Sevcheria, the slave trader in the first half of the story who, due to production cost-cutting, becomes Nero’s security captain in the second half, is killed by a torch to the face.  Oh, also, this story leads directly into The Web Planet, just in case you thought things couldn’t get any worse.

But in spite of all that, the main plot still ends with eight minutes left to go in Episode 4, and then we’re back to light comedy again.  Ian and Barbara return to the villa, clean up the mess left from the slavers’ break-in, evidently have about 17 hours of uninterrupted sex, and then get walked in on by the Doctor and Vicki, neither of whom had any idea that Ian and Barbara ever made it to Rome in the first place.  So we’ve gone from the stately Shakespearan historical adventures with Marco Polo and The Aztecs under the pen of John Lucarotti, to this.  Under Dennis Spooner’s magic wand, this type of broad historical comedy will by and large be the new  template for the series, and will remain so right through the final historical in Season 4.  With one major, glaring exception yet to come… John Lucarotti is not quite done with the format yet.

An incredibly languid sojourn through the "Doctor Who" canon, with illustrations from the Topps 1979 baseball card set.
View all posts by drwhonovels →
This entry was posted in 1st Doctor and tagged 1st Doctor, Barbara, Dennis Spooner, Doctor Who, historicals, Ian, John Lucarotti, Novelizations, Target, Vicki. Bookmark the permalink.

2 Responses to The Romans