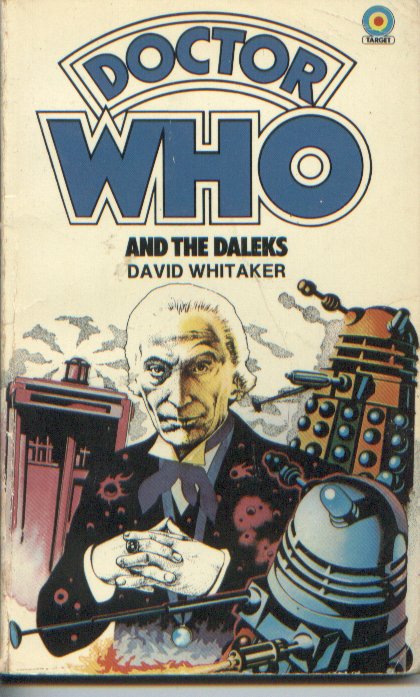 The edition I own.

Title: Doctor Who in an Exciting Adventure With the Daleks
Televised as: The Daleks (video release title)
Written by: David Whitaker
Teleplay by: Terry Nation
Published in: November 1964
Chapters: Seven through Ten

Conventional  wisdom is that Episodes  1 through 4 of  The Daleks is a very different story  than Episodes 5 through  7.   The first four episodes involve the TARDIS crew largely on their own, going  up against the Daleks for the first time, as we talked about that last time.  The back three episodes have been compared to a Flash Gordon serial, with Ian and Barbara separated from the Doctor and mounting their own expedition.  This notion is highlighted in David Whitaker’s novelization, which is told solely from Ian’s POV: this portion of the book is completely Doctor-less and almost equally Dalek free.  Instead, it features Ian attempting to herd cats — a team of reluctant Thal adventurers, and Barbara, who’s inexplicably mad at him and barely speaking to him — and becoming an action hero in his own right.

The Episode Five material is an interesting object lesson in how Whitaker used Nation’s TV scripts as a mere jumping-off point, rather than as something to emulate perfectly. Ian tries to goad the Thals into taking defensive action against the Daleks, and does so in the book by  staging a boxing match between Ganatus and Antodus.  Using Queensberry rules, of course (this ends with a comedy pratfall). The material where Ian threatens to steal Alydon’s fiancee and bring her to the Daleks is ported over from the TV version, yes, but Alydon’s response – an impassioned speech to the Thals as to why he’s choosing to fight the Daleks – is far more lush and poetic than the version of the same speech which Nation wrote for him on TV. Nation’s words are actually moving, and well-delivered, but his dialogue trends more towards the functional, whereas Whitaker is going for imagery, poetry, metaphor.

But I have found a new responsibility, and that is to exist.  We were born to survive, not to die, and living is a much harder thing to do than dying.  I say to myself, why even struggle against the elements?  The scorching sun that has ruined our crops and made us travel in search of food?  Why not just sit down in that sun for ever until we burn away or die of thirst?  I say to myself, why even battle with the soil to grow things? I realize that all life is a struggle.

The Doctor also cuts a slightly more impressive figure in the book, openly volunteering his services to Alydon.  While those scenes are dropped from the TV version, here we at least find out how the Doctor comes to march Alydon’s Thals on the front gates of the Dalek city.

Meanwhile, for the first time, Whitaker actually uses a cliffhanger moment (the death of Elyon by lake monster at the end of Episode Five) to end a chapter.  All of the other cliffhangers are either hidden in mid-chapter, or eliminated entirely. 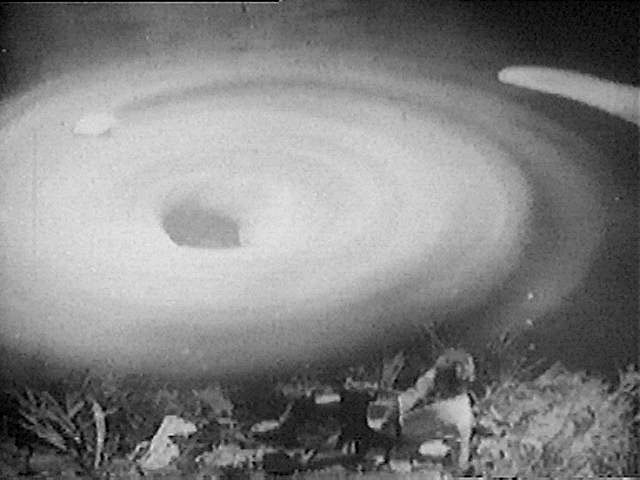 But what a cliffhanger!

And then comes the Ian and Barbara romance.  In Chapter Seven, Whitaker strongly intimates that Barbara has fallen in love with Ian, and that’s why she’s treating him so coldly. In a nice narrative twist, the Doctor and Susan recognize this fact, it seems, even while Ian doesn’t, thus putting the reader a few paces ahead of the narrator.

“Why is she being so unfair?” [Susan] cried out at last.  The Doctor patted her arm and started to follow in Barbara’s footsteps.

“She isn’t being unfair, Susan my dear,” he said quietly.  “Miss Wright is asking questions and that is a different thing entirely.”

“What questions, Grandfather?  I don’t understand?”

Neither did I for that matter, so I listened as carefully as I could without giving away that I was in any way interested.

“Oh, she knows the answer already.  The trouble is she doesn’t believe it.”

I saw a look pass between the two of them then Susan glanced at me.  She said, “Oh, I see.”

I didn’t know what they were talking about.

The Episode Six material consumes less than a full chapter of the book (Chapter Eight, the wonderfully titled The Last Despairing Try), because Whitaker just chucks half of it out. All the Doctor/Susan/Alydon scenes, leading to their capture by the Daleks? Gone. That long fight between brothers Ganatus and Antodus, seemingly put in the TV script for the sole purpose of getting the episode to 24 minutes? Gone. In fact, all of Antodus’ petulant cowardice and fear of the dark? Gone (Antodus has only a miniscule part in the novelization, as a result).

Instead, Whitaker fills the void with real meat. Kristas, an incidental character who spoke only a handful of words in the TV serial, becomes a major character in the book. In print, he’s a gentle giant and wise philosopher, who talks about the evil nature of violent death, and how everything the Thals do is a struggle (“The sun will be a worthy opponent”, he declares, before free-climbing a rock face in the searing Skaro heat).

If you read the Episode Six transcript online, you’ll note how sparse and functional the dialogue is; “City of Death” Part Two this is most certainly not. Where there was lots of slow-moving adventure on TV, Whitaker pares the material down to size, replacing the deleted Doctor and Dalek scenes with two tense (and completely unfilmable) action sequences: Kristas’ scaling the cliff face, and a fight against first one, and then 20 or 30, creatures from the Lake of Mutations.

Once Ian, Barbara, Ganatus and Kristas survive the Episode Six cliffhanger, there’s a lot more danger in store for them, both in the caves and inside the Dalek city – much more so than on TV. Here, they have to climb through a narrow 20-foot tunnel, and then dodge a phalanx of 20 Daleks as they explore the city (including the Daleks’ extensive weapons workshop and hydroponics workshops, two sets that even the great Raymond Cusick himself could not fit inside Lime Grove Studio D). Ian’s ultimate two-prong strategy – he and Kristas will destroy the Daleks’ master control room, while Alydon and his team do as much damage as they can elsewhere in the city – is more detailed and impressive in the book.

Something new that we also get here is the Glass Dalek – Whitaker’s early take on what the Dalek’s ruler should look like. Later on TV came the Emperor Dalek and the Dalek Supreme, but here it’s a mutant in a transparent glass Dalek case.  This Dalek doesn’t speak in a monotone, but rather squeals his orders out to the assembled Dalek units. Ian smashes him to bits.  With a Dalek claw arm.

The denouement is also markedly different in tone. Here, Barbara works through her burgeoning romantic feelings for Ian — with an assist from Kristas; but Ganatus’ crush on Barbara, a key feature of the closing moments of Terry Nation’s script for Episode Seven, is utterly absent, as is Ganatus’ personality. In the end, the Doctor offers Ian and Barbara a chance to stay behind on Skaro, help the Thals rebuild their world — a charming moment which wouldn’t have fit into the TV story arc of the time. In fact, the Doctor is much more expansive here, staying behind for a Thal feast in the time travelers’ honor, and dispensing a few more words of wisdom than did Hartnell on TV. The closing scene of The Daleks is the first time that we saw Hartnell adding his personal charm to the role of the Doctor, and Whitaker doesn’t shy away from highlighting that moment.

Looking back, this is a pretty special Doctor Who book, for a whole bunch of reasons. It’s the first novelization, the first of many in a long line of novels that are still being churned out today. Since there was no mold to break at the time, Whitaker spares no expense in rearranging and improving the original TV scripts (which were no slouch themselves), and adds persuasive details: more action, more adventure, a nascent romance, and a lot more meaty dialogue. Given the choice 30-odd years later, this is clearly not a book that I’d ever return to the store again.

Will the second book in the series be able to top the first?

Next Time: Doctor Who and the Zarbi. No.  No it won’t.

2 Responses to Sleepless on Skaro