The Magic of Terrance Dicks.

Doctor Who and the Auton Invasion.  The edition I own.

Title: Doctor Who and the Auton Invasion
Televised as: Spearhead from Space
Written by: Terrance Dicks
Teleplay by: Robert Holmes
Published in: January 1974
Chapters: Five through Ten

Last time, we talked about the arrival of Terrance Dicks to the Target Doctor Who novelization range.  Terrance remains to this day a living legend.  He was Doctor Who‘s most prolific script editor, working on the series in that capacity for five full years, and continuing to write scripts for the series for several years after stepping down.  He also wrote the bulk of the Target novelizations and served as unofficial editor to that range for just about all of the 1970s.   Even after Doctor Who went off the air and there was nothing left to novelize, he stuck around and contributed to the long-lived series of original novels that both Virgin Publishing (which bought out Target) and later BBC Books (which took the license back from Virgin in 1997) churned out during most of the 16-year gap between the Classic Series and the New Series.

But that kind of familiarity breeds contempt.  In being so prolific, in writing so many books, Terrance’s name did become something of a punchline to different segments of  fandom.  In the years to come after 1974, his  novelizations would be very brief, and  pitched at a much younger reading audience than his earlier work — especially when adapting Graham Williams-era adventures, stories which arguably lacked the complexity of the earlier Barry Letts and Philip Hinchcliffe eras.  And the various New Adventures and Eighth Doctor Adventures and Past Doctor Adventures — books that Dicks, a man in his 60s and 70s, wrote alongside a stable of young writers primarily in their 20s — were not always as edgy or as richly detailed or as heavy or message-y as many of the other books in those lines.

But that’s bringing you in at the end of the story.  Terrance Dicks didn’t get to write all those  books merely because he was a fondly-remembered relic.  At his best, there’s really nobody else who can match his storytelling capability or word choice or dry wit.

And Doctor Who and the Auton Invasion is among his very  best.

Now, this is not a story that Terrance can claim all the credit for.  He was working from the scripts for Spearhead From Space, and that’s a Robert Holmes story, and Holmes was probably the best writer in the classic Doctor Who pantheon.  A great story can’t help but produce a great novelization.

But do this.  Call up the transcript for Spearhead From Space, and glance at it after reading every few scenes from the novelization.  Notice something?  The scenes in the book go on for much longer than the corresponding scenes on TV.  Even minor characters have more to do and say and think and feel in the book, than they did on TV.  Some of this may be taken from Holmes’ original scripts — it’s possible that script editor Dicks, and episode director Derek Martinus, had to do a lot of pruning of Holmes’ words, to get the story to fit into four 25-minute time slots.  Or, more likely, Dicks is improving upon Holmes’ own work, extending scenes and adding transitional or establishing moments, to turn the TV episodes into a proper novel in their own right.

And this is what elevates Doctor Who and the Auton Invasion: meticulous attention to detail. For this, Dicks’ first novelization, he pulls out all the stops, adding all sorts of wry character asides, and a surprising amount of vividly described action and violence, that were most certainly not the hallmarks of Dicks’ later novelizations, or his subsequent 30-plus-year career writing younger children’s fiction. 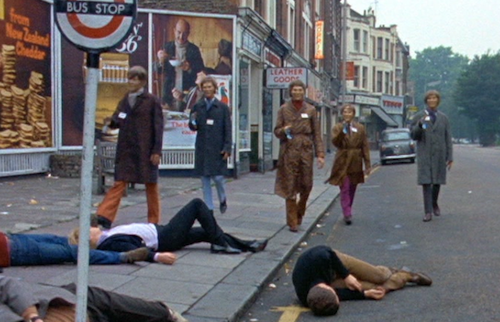 The Auton Invasion.  A moment so iconic that it was reused virtually  wholesale in Rose, the first episode of the New Series.

Dicks, even at his weakest, was an expert in providing near-perfect one- or two- sentence descriptions even of the most minor characters.  Early in this one, when the Nestene Consciousness’s meteorite shower rains bits of Auton upon Oxley Woods, in a funnel of super-heated air, local poacher Sam Seeley blames the freak atmospheric condition on “those atom-bombs”. This tells you a lot about Seeley’s isolated, paranoid, and conspiracy-theory driven mind; one can well imagine him supporting anyone who promised to Make Oxley Woods Great Again.

Even Sam Seeley’s wife, who does little on TV apart from get menaced by an Auton in Episode 3, comes to life here with just a single broad brushstroke: “Meg had been married to Sam for over twenty years, and by now she disbelieved everything he told her on principle”.  Ha!

Everyone gets a zinger here, even the most minor of characters.  Dr. Henderson, a local physician who tends to the unconscious Third Doctor in the first half of the story, “[a]s always… regretted his quick temper.” Mullins, a hospital porter who unwisely notifies the press about the Doctor’s alien physiognomy, is “a seedy little man, easy to ignore”. General Scobie, regretting the complications of his command (in this story and this story only, he’s the Brigadier’s immediate supervisor), “had a flash of regret for the days when soldiering was simpler.  A nice straight-forward cavalry charge, now”, he laments.

Apart from relishing in the human characters’ shortcomings, Dicks never shies away from stressing the alien nature of the Nestenes or their Auton servitors. Of Channing, the Nestenes’ main agent on Earth, we learn, through the eyes of a journalist:

There was something about this man, something odd. The clothes were too immaculate, the handsome features too calm and regular. He looks like a wax dummy, thought the reporter uneasily. Like a waxwork come to life.

And then there’s Corporal Forbes, a very small role on TV, whose only job is to get killed by the Autons in Episode 2.  But Dicks takes this most minor of cannon-fodder characters, gives him personality traits, and makes far more heroic the manner of his death. As Forbes is sent off on the driving mission that will result in his death, Dicks is sure to call him “a very experienced driver.  He’d never had an accident in his life.” — an effective storytelling technique, letting us know right off that this man is doomed.

More than that, in the book, Forbes survives the car crash and has a brief shootout and tussle with a relentless Auton.

The giant was by now so close that Forbes plainly saw the line of holes appear across the breast of the dark coveralls. But there was no blood, thought Forbes frantically.  No blood, and the thing just kept on coming.
Swinging his empty rifle as a club,Forbes landed  a tremendous blow on the huge, smooth head. The giant staggered, then smashed the rifle from his grasp, casually, as if swatting a fly. The last thing Forbes saw, as another blow struck him to the ground, was that blank, expressionless face looming over him.

Captain Munro, the UNIT captain in this story (before the advent of Mike Yates in Season 8) is also given several moments which make him far more vivid than on TV.  After the Brigadier rattles off a string of impossible orders, Dicks has Munro reflect: “is that all, Brigadier, he thought to himself.  And what do I do in my spare time”.  He later “concealed a grin behind a sudden fit of coughing” after the Doctor issues a withering putdown of the  Brigadier — something that many UNIT subordinates will do in future novelizations.

Hibbert, the plastics factory owner who falls under the spell of the Nestenes, also receives the POV treatment in several scenes.  Dicks makes us feel sympathetic for the poor doomed fellow, with several variations of the same theme:

As always when Channing spoke to him in that tone, Hibbert felt calmed and reassured.  A sense of clear-headedness and well-being came over him.  It was all so simple.  All he had to do was follow Channing’s orders and everything would be all right.  He had to do what Channing told him because… because… Hibbert found that he couldn’t quite remember the  reason. But he was quite sure that Channing must be obeyed, that there would be the most terrible consequences if Channing became angry with him.  Hibbert’s face twitched at the memory of some horror buried deep in his mind.  Then he became relaxed again, as he heard Channing’s soothing voice.

The Autons, too, those faceless and voiceless characters, are the earliest beneficiary of a line that Dicks would often use to describe not-quite-alive automata over the years: “It was shaped like a man but it was not human… Its face was a rough copy of a human face but blank, unfinished.”

Dicks also stages a mean action sequence.  Not only does he gives Corporal Forbes a longer and more dramatic death scene, he also pads out two other brief TV moments into effective set pieces. Ransome’s quick escape from the plastics factory after the Episode 2 cliffhanger, goes on for a few more pages in the book; Dicks blocks the scene expertly (noting how Ransome inadvertently saves his own life by hiding behind the tank housing the main Nestene body), even though it never actually happened on TV that way for him to block.  And then, in the big finale shootout at the factory, Dicks gives the Brigadier and UNIT far more than just five Autons to fight, and a lot more weapons to fight them with.

This goes beyond transcribing what happened on the low-budget TV show, and showing us that Dicks has a far more vivid, inventive mind’s eye than hes often given credit for.

The Episode 4 material takes up nearly a third of the book — not that Dicks has skimped on adapting the first three parts, but he adds a great amount of detail to  the final act. The Doctor and Liz’s visit to Madame Tussaud’s is given more space, and the ticket seller is given an expanded role, lamenting that the Nestenes’ exhibition of civil servants doesn’t include enough pop stars. The Autons’ actual invasion has greater depth and scope here — not just breaking out of shop windows on one London street, but infiltrating the highest levels of government and causing pages’ worth of chaos.  Dicks briefly gives POV from a policeman, who, upon seeing an advancement of Auton shop-window dummies, thinks: “Students…  They’d gone too far this time.  That thought was also his last.”

The Doctor finds time to remind us that he’s a “qualified rocket pilot on the Mars to Venus route” — not a Holmes line from TV, but a Dicks original, and one that he was about to plug into his own script for Robot,  the Fourth Doctor’s debut story that aired a year after this book’s release.

But, among all other things, Doctor Who and the Auton Invasion is mostly Terrance Dicks’ love letter to the Third Doctor.  The Doctor mentally contemplates “reversing the polarity of the neutron flow” at one point — Pertwee’s favorite bit of on-screen technobabble, although he only used the full line once during his five-year tenure as the Doctor.  And Dicks ends the book here with a moment of charm that Pertwee didn’t get on TV.  Pertwee would later insist on getting a “moment of charm” for his character in each story, and Dicks remembers to retroactively add one here:

The Doctor put a comforting arm around her shoulders. “I think we’ve won, Liz” he said gently. “But the price has been very high.”

But no price is too high if you find this book marked up second-hand.  Own it at any cost.

6 Responses to The Magic of Terrance Dicks.