Posted on January 3, 2017 by drwhonovels 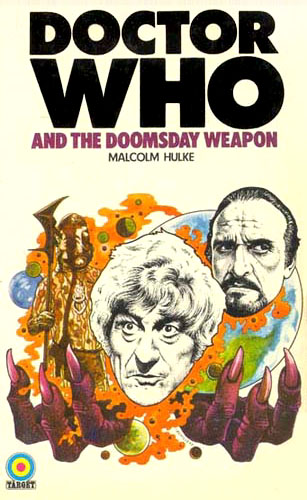 Doctor Who and the Doomsday Weapon.  Original 1974 cover.

Colony in Space is not a beloved story. The Discontinuity Guide, the text of which for a time was pressed into service as the BBC’s official summary of the episode on its website, likened it to “watching socially-aware paint dry”.  Doctor Who and the Doomsday Weapon, though, is much more universally a beloved novelization.

This is the second straight book from Malcolm Hulke. Last time, we described how Hulke cheerfully junked the seven-part scripts for Doctor Who and the Silurians, and told almost a brand-new, and much differently-paced, story in the novelization, Doctor Who and the Cave-Monsters. Hulke does almost exactly the same thing when adapting Colony in Space for print. He’ll lavish the first half of the book on the first two TV episodes, before rushing through the back four episodes in the second half of the book.

On TV, Episodes One and Two were largely static material, long before the main villain (The Master) even shows up. In the book, though, the Episodes One and Two are almost the raison d’etre for the whole book, and all the Master business (and indeed, all the business about the Doomsday Weapon itself) are rushed through only in the back third.

Episode One alone takes nearly seven of the book’s 21 chapters to adapt. As with his previous book, Hulke essentially dedicates one chapter to the viewpoint of a different character, or group of characters. For my money, each one of these first seven chapters alone could serve as a remarkable short-story.

Chapter 1: A Missing Secret
This is the first novelization of a Master story, so Hulke has some scene-setting to do. TV’s Episode One opened with a short scene on the as-yet-unnamed planet of the Time Lords. Hulke expands on this for the book with original characters, as the 2,000-year-old “Keeper of the Files” gives his very young 573-year-old apprentice a quick precis on Time Lord history: how the first TARDISes could only fit three to four people, how the Doctor and the Master both became escapee Time Lord renegades.  We even get another Doctor WHO? Joke:

Suddenly the old Keeper’s failing energies returned. “Still, even if he cannot control [the TARDIS], others sometimes can.”
“I don’t understand,” said the young Time Lord, “what others? Who?”
“Who? No, Who can’t control it… not always.”

Hulke here employs the phrase “chameleon-like” to describe the TARDIS’ (theoretical) shape-changing ability, which I believe is the first official use of the term, seven years before we first heard the term “chameleon circuit” on TV. The Master is described as someone who “never does anything good for anyone. He’s thoroughly evil”. There’s also another recap of The War Games, as was done in one of the previous novelizations two months earlier.

Here, we learn that the Time Lords keep the “Doomsday Weapon” secreted on a distant planet, and that the Master has stolen their data file on the subject — leaving behind a sacrastic note best read in Roger Delgado’s voice: “Thank you for letting me know where to find the Doomsday Weapon. – The Master.”

Chapter 2: Into Time and Space
Apart from the Master’s debut, his is also the first Jo Grant novelization. She’ll also appear in this month’s concurrent release, Doctor Who and the Day of the Daleks, but, as her “proper” TV debut story, Terror of the Autons, would not be novelized for another year or so, Doomsday Weapon is chosen as the vehicle for her formal introduction. Hulke thus gets to write a fictional introduction scene for Jo, much as David Whitaker wrote a fictional introduction for Barbara and Ian back in the very first novelization. Jo is much less a buffoon in Hulke’s hands than she was in her TV intro. Here, she’s quite determined to be a spy, and, while it’s still said that her influential uncle got her the UNIT job, Hulke stands up for her quite a bit in the face of a series of patronizing older men:

While she was still at school she decided what she most wanted to do: to become a spy. One half-term she took herself to London and sought out her uncle who worked as a Senior Civil Servant for the Government. “I want to be a spy,” she said. He laughed, and sent out one of his many secretaries to buy her an ice-cream.

But Jo here is in fact competent, good at her studies and wanting to be more than an embassy filing clerk. It’s the Doctor who’s stubborn in refusing her services, once she arrives at UNIT. When she follows him into the TARDIS, the Time Lords choose to use this moment to send the Doctor off in search of the Master, with Jo along as an unwilling (and disbelieving) passenger.

Here’s how Hulke describes the TARDIS dematerialization sound: “Jo’s ears were pierced by a terrifying sound, something like, yet not quite like, the trumpeting of a thousand mad elephants”.  Vivid, if not quite as punchy as Dick’s preferred “wheezing, groaning sound”.

Chapter 3: The Planet
Jo faints from the TARDIS’ sudden departure, and the Doctor wakens her by saying: “I’m sorry, but I don’t remember your name.” Hulke gives Jo a meta-joke about the decidedly terrestrial locations used to double as alien planets in ’70s Who: “The monitor screen showed a barren landscape, a treeless stretch of rock and occasional shrubs. “It looks like somewhere in North Wales,” she said.” Jo continues to resist the fact that they’re on another world, and in fact accuses the Doctor of having hypnotized her. I’m not sure this is the best way of rendering Jo as a sympathetic audience identification figure, but it does allow Hulke to show the Doctor persuading her to take chance and explore this strange new world, giddy in his unexpected freedom from exile on Earth.

But, as was also typical for ’70s Who, the TARDIS crew are quickly captured, at the point of a “a futuristic-looking shotgun”. We meet Robert Ashe, the leader of this colony in space, except, in the book, his given name is changed to John, and, as “a big, white-haired man”, he looks nothing like John Ringham, who played him (in an oddly non-villainous turn) on TV.

This is also where Hulke brings us in on the storyline that dominated the early episodes on TV: the clash between the idealistic colonists and the greedy industrial combine.  The colonists are fleeing an overcrowded 30th-century Earth (500 years later than the TV story), but can’t get any crops to grow, and are having problems with the native population of their new planet (named “Uxariues” in the script,  unnamed both onscreen and in the novelization, and called “Exarius” on the back-cover blurb of the US reprint of this book).  They’re also terrified of the arrival of any company seeking to turn this planet into a strip-mined slag heap, hence their initial suspicion of the Doctor and Jo.

The Doctor and Jo receive a hostile welcome at the colony in space.

Chapter 4: The Monster
Hulke now shifts us to our third POV in four chapters: from the Time Lords, to Jo Grant, and now to the Leesons, two of Ashe’s more idealistic colonists. Through the mind of Jane Leeson, Hulke gives us a riveting glimpse of life on Earth circa 2972. Earth is now covered, every square kilometer of land replaced with concrete and housing towers, with no more fresh air or grass or trees.

By getting married, they qualified for a room of their own. Previously she had had to share a room with her parents and three sisters. The marriage was conducted by a friendly computer that played music to them as well as announcing that their State records had been stapled together in the great Automatic State Personnel File, which meant that they were then married. Then the computer gave them the key to their room, a cubicle just big enough for a double-bed, a shower, and a lavatory. They took one look at the room and decided they had to escape.

(The two years that I lived in Manhattan were much like this.) We learn how the Leesons sought out Ashe, and how like-minded citizens pooled their resources and made it out to this planet for colonization. They did this in the face of “the terrifying creatures space travelers had found over the centuries – Monoids, Drahvins, some small metallic creatures called Daleks”. Hulke may have been pulling our leg by name-checking two of those alien races, but he also works in a footnoted plug for his previous book.

And then Jane Leeson and her husband are killed by some unseen beast, “something infinitely more terrifying than she had ever imagined in her wildest dreams”, and there’s a full-page illustration of her covering her mouth in abject fright …

Chapter 5: Starvation
Here, it’s a conversation between Ashe and the Doctor about colony life, and about the Primitives, a six-fingered race of devolved and naked humanoids with whom they share the planet. Hulke goes into much more detail about these creatures than the corresponding Episode One did on television. We learn of the Primitives’ irrational fear of dolls, which will pay off later, and which adds still more complexity which the TV episodes lacked. On TV, the Primitives were introduced only just before the cliffhanger, and were established as having killed two colonists, a jarring detail which Hulke dropped for the book.

Through the Doctor’s eyes, we also learn more about these strange humans of 2972, also devolved in their own way. The Doctor recalls: “All the Earth animals had been systematically exterminated by Mankind by the year 2500”.  But the colonists’ tale gets more poignant yet …

Chapter 6: The Survivor
Another POV switch, as  we hear about the colony’s woes from inside Ashe’s head; establishing Ashe as a POV character will also pay off in a big way in the Episodes Five and  Six material. It’s here where we learn that none of the humans remember how to hold a funeral, and it’s the Doctor – not even human himself – who has to reintroduce the custom to these refugees from mankind, who’ve even forgotten the word “graves”.  In burying the Leesons, we also learn a startling fact about the year 2972:

“Now we have a service,” said the Doctor. “What religion were they?”

This sequence, with the Doctor reminding mankind of something they’ve forgotten, is pretty much unique in all the novelizations.  If only some of the endless capture/escape/capture loops that dominated this story on TV, had been replaced with character-driven material like this, the TV serial would have a much better reputation.

Chapter 7: The Robot
Now the Doctor instructs Ashe on the importance of remembering man’s survival instinct.

“How do you think Man first made out on Earth?” asked the Doctor. “He had to fight sabre-toothed tigers, rampaging mammoths, diseases of all sorts. He survived.”

To that end, the Doctor visits the Leesons’ wrecked dome, to solve a puzzling mystery: how a monster reported to be 20 feet high, could enter a dome with a 6-foot-high door (the TV scripts pre-dated the UK conversion to the metric system; writing in 1974, Hulke now has the colonists thinking in metric, and it’s the Doctor who converts us back into feet and inches). We meet our first Primitives, who here are mentioned to be telepathic, and who scavenge items from the wrecked dome. We also learn of the Doctor’s “capacious” pockets, a term that Hulke also used in Cave-Monsters; Paul Magrs, who later wrote licensed Who novels in the late ’90s, described the use of this word as something that marked you as a reader of the Target novelizations.

And then the cliffhanger happens, except again Hulke hides it in mid-chapter, in mid-paragraph, in mid-sentence, even … I do wish he’d stop doing that…

Next Time: Episode Two, and the return of long stretches of book narrated by the bad guys.