Airdate: January 12, 2020
Written by: Ed Hime
Directed by: Lee Haven Jones
The Story So Far: Graham wins an all-expenses paid trip to a tropical resort, haemovores are trying to break into the Starliner, and a Message slams into the Yucatan peninsula, killing off all the dinosaurs …

The Series 12 two-part premiere was a master class in slow, luxuriant, storytelling, with Chris Chibnall getting two full hours to tell us about Spyfall (Parts One and Two).  The next episode, however, Orphan 55, is a master class only in strident lecturing.

We were a bit spoiled, perhaps, that both parts of Spyfall were an hour long.  Orphan 55, however, is a mere 46 minutes, and is a beast-of-the-week story rather than a richly layered bit of story arc.  There’s a brief reaction shot in the first scene of the Doctor looking gloomy, presumably to remind us of the closing minutes of the previous episode, but then things hits the ground running rapidly, with no reference to the ongoing Timeless Child business.

What Orphan 55 is, then, is three separate stories in one, each one lasting about 15 minutes, with a loud shifting of gears as the first part pivots into the second part at the 15-minute mark, and as a very big twist leads us into the third part at 30 minutes in. 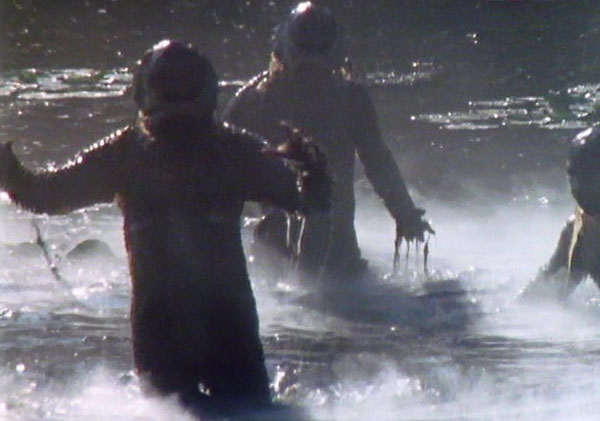 Whereas Full Circle, the last time we saw the Dregs, was a four-part story

The initial plot conceit is that the TARDIS crew wins a vacation to a tropical holiday resort spa.  But the vacation concept is exploded within literal seconds, as several exotically-dressed extras are eaten within seconds by slavering beasts. The first 15 minutes are a base-under-siege story, something which we often saw during the Patrick Troughton years.  The cast of guest characters includes one person who’s an impostor, two people who share a secret family connection, and two pairings (boyfriend/girlfriend, and father/son) who realize that they don’t know each other as well as they thought.  The monsters appear to be a cross between Giger’s Aliens (slavering teeth within elongated jaws), the Haemovores from The Curse of Fenric (nearly identical origin story), and the Marshmen from Full Circle (rubber costume-looking men slow-walking in formation out of the mist and towards the camera; and they can be defeated by oxygen).  The Dregs are CGI-designed to resemble men in rubber suits, an idea that I actually love, as it hearkens back  to the rubber-monster’d glory days of the Classic Series.

Just as the Marshmen resemblance appears to be deliberate, I suspect that the Gigeresque look is also no coincidence.  The middle 15 minutes of the story, before the surprise reveal, is a mini-restaging of Aliens.  With a bigger budget than that high school production of Alien that won the Internet’s heart a few months ago.  We learn that the resort has been intentionally placed on a dead planet, with an eye towards terraforming, much as LV-486 in Aliens was being terraformed before all those pesky Xenomorphs got in the way.  The Dregs here — this story’s Aliens stand-ins — are apex predators, and soon the Doctor and the few guest cast members who survived the first 15 minutes, are in an armored truck heading straight into deadly territory.  In a nifty bit of effective location filming, the production here takes a page out of the Planet of Fire playbook, and uses one of the Canary Islands (Tenerife instead of Lanzarote) for both the spa-resort setting and the barren rocky planet surface.

The pace is frenetic almost from the get go, and once we’re out of the dome and into the middle third of the story, a supporting character dies every two or three minutes, like a condensed version of the last third of The Poseidon Adventure.  The script is witty, with tons of quips, and there’s two frustrated romances (Benni’s often-interrupted marriage proposals to Velma, and Ryan’s often-blocked attempts to flirt with Bella).  And you know that things will turn out all right for at least some of the guest cast.  The principal guest star is Laura Fraser — I’m glad to see she survived being poisoned by Walter White during the Breaking Bad series finale, next to which Orphan 55 is a positive opera bouffe.  And another cast member is a plucky 12-year-old boy, this episode’s version of Newt.  But while the monsters are redolent of the vampires from Curse of Fenric and the costumes from Full Circle, the script is not quite so poetic as either of those earlier two stories. 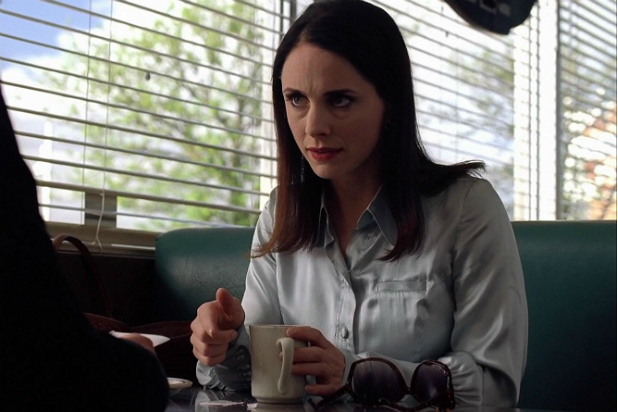 Cane (Laura Fraser) does not take any stevia in Orphan 55

The big twist in Orphan 55, without naming the direct spoiler, is one familiar to viewers of The Mysterious Planet, as well as a particular Rod Serling-scripted late 1960s parable, y’know, the one about humans being enslaved by lesser bipeds.  It serves to flip the story from an Aliens-esque thriller, to a story about the environmental crisis and the Sixth Extinction.  Which, as Orphan 55 aired on a 64-degree-Fahrenheit day in the middle of January in New York, hits uncomfortably close to home.  The discussions of how the planet Orphan 55 was given that new name are a bit ripped-from-the-headlines, and doubtless will cause J. Rightwing Fanboy to go into more spasms of rage about Doctor Who “getting political”.  On the subtlety scale, Ed Hime’s script falls somewhere between eight (The Green Death), ten (Invasion of the Dinosaurs), and eleven (The Doctor’s Daughter) on the message-with-a-sledgehammer scale.  What, you expected something else from the author of It Takes You Away?

The Doctor’s closing speeches to the camera are among the least subtle writing ever seen on Doctor Who, and veer more on the side of PSA than dramatic screenplay.  But, again, it was 64 degrees outside in Brooklyn on January 12th, so who am I to criticize the estimable Mr. Hime?  Check that — there’s much to criticize for the tone particularly of the story’s final two minutes, and just because Hime happens to be correct, doesn’t give him a free pass for the over-the-top messaging.

I didn’t mind most of Orphan 55 minute by minute.  The supporting cast is good, the locations are evocative, and much of the dialogue is witty, so things don’t really fall apart until the last 15-minute segment.  But apart from the relentless messaging, Orphan 55 is also not the Doctor’s finest hour, in terms of scripting the lead character.  Jodie Whittaker is a delight to watch, as usual, but the story requires her to jeopardize everybody by bringing everyone out of the dome (including the plucky green-haired boy), to jeopardize them once again by talking too much and thereby consuming all the oxygen on the planet’s barren surface, and then to allow a couple/three characters to die by heroic suicide (either by failing to take any action to avert their course, or in one case by wandering off directly into peril, thus necessitating a rescue from someone who can’t escape).  Wandering off and talking too much… not the most Doctorish of attributes. 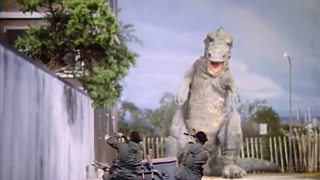 “DO YOU HAVE A FEW MINUTES TO TALK ABOUT CLIMATE CHANGE BEFORE I EAT YOU.”

The story lost me by the closing monologue, nearly delivered straight to the camera.  While the Doctor is correct, of course, it’s all a bit heavy-handed, and I usually come to this show for an escape from the news headlines.  The end of Orphan 55 is akin to twelve catastrophic news articles all being pushed to my phone at once.  I don’t think history will judge this story too kindly — if any of us actually live long enough through the climate crisis to be able to judge it.