Posted on January 9, 2020 by drwhonovels 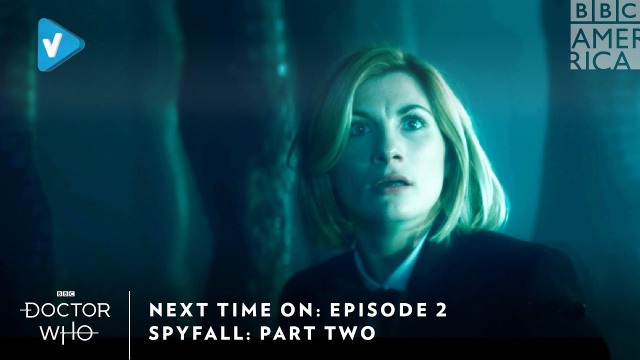 Airdate: January 5, 2020
Written by: Chris Chibnall
Directed by: Lee Haven Jones
The Story So Far: The new Master broke an airplane on the show and broke the Internet in real life.  Absolutely nobody on the Internet had any faith that Chris Chibnall could wrap the story up satisfactorily

“When I kill them, Doctor, it gives me a little buzz right here.  In the hearts.” — the Master, Spyfall, Part Two

The end of Spyfall, Part One was one of the most interesting and effective cliffhangers of the New Series. We learned that the Master was inhabiting a new body, and, having infiltrated MI6, was now working with an American tech giant (a 60-something cross between Mark Zuckerberg and Elon Musk, only British) and a strange glowing extra-dimensional species of ghosts identified in the end credits as the “Kasaavin”.

The Internet wasn’t used to having to unravel surprise cliffhangers like this — we really hadn’t had one since the end of World Enough and Time over two years ago.  So Fandom quickly set to work telling us that we weren’t really seeing what we were seeing.  Fandom theorized that this was some Other Master — post-Anthony Ainley, pre-John Simm — anything but the next incarnation of the character last seen as Michelle Gomez.  Fandom theorized that this was a Multiverse Master and thus not even “our” Master at all.  Fandom theorized that because Daniel Barton’s company was called “Vor”, that these white ghosts were really the Vardans from The Invasion of Time (even though they were called the Kasaavin in the episode credits).

Chris Chibnall obviously wasn’t thinking like a Fan.  Absolutely none of the predictions that I saw from Fandom, came true.  Not even one.  Instead, Chibnall used the language of Doctor Who eras past to tell his story, continuing to change the course away from isolated Season 11 stories.  But Skyfall Part Two, made in a different production block and with a different director than Part One, is different in tone.  Gone is the Pertwee, and in its place is a familiar bag of tropes (good tropes, mostly), from the two previous show-runners.

The crashing-plane cliffhanger was resolved with a trick out of Blink (and it’s always a good idea to borrow a plot device out of Blink), with a video recording of the Doctor interacting with the Fam in real time and telling them how to land the crashing plane safely.  Fandom, incidentally, has decried this as a Bill & Ted trick rather than a Blink trick.  I’m not even so sure why that would be a bad thing, but it feels more Blink to me.

Taking a page from Steven Moffat’s frenetic, a new set piece every five minutes, storytelling style, Chibnall then moves away from the linear Part One, and starts shaking up the locales.  The Doctor winds up in the Royal Gallery of Practical Science in 1834 Adelaide.  After a stop in his own TARDIS — last seen flying through space next to Barton’s plane in an acknowledged debt to the Gale farmhouse in The Wizard of Oz — the Master lands in the same gallery and starts murdering people with his revamped Tissue Compression Eliminator, with a malicious glee rivaling Delgado and Ainley and Simm at their best.

After a meeting with Charles Babbage and (the future) Ada Lovelace in Adelaide, it’s off to 1943 Paris and an encounter with the spy “Madeleine” — Noor Inayat Khan.  Because he’s allied with the Kasaavin (who are revealed to be cross-temporal spies), the Master is able to pursue our heroes, briefly posing as a Nazi officer in Paris.  Apart from the Blink homage, Chibnall also borrows Russell T. Davies’ use of the Doctor Who theme melody to serve as a Time Lord code, the Master’s heartbeat, and it’s how the Doctor can use Noor Inayat Khan’s wireless to communicate with the Master and arrange a showdown atop the Eiffel Tower.

The climax is pure Davies.  As in Rise of the Cybermen, mankind’s attachment to personal technological devices makes a convenient bridgehead for the Kasaavin invasion, and the Kasaavin army does kinda resemble the Army of Ghosts.  We see several random people throughout the world affected by the cell-phone invasion, comparable to several Davies-era montages.

And, in the biggest Davies-style reveal of them all, the Master tells us that Gallifrey has once again been destroyed, pulverized, nuked, giving the show the same blank slate it enjoyed in between The End of the World and The End of Time.  The Doctor is once again an orphan, at least temporarily.

Jodie Whittaker is right at home in this script.  It’s funny watching her figure out how to take over the room at the Royal Gallery (before the Master’s arrival), forgetting that she can’t introduce herself as a man anymore.  She acts concerned and maternal over Ada, and is properly David Tennant-esque whimsical in the Blink homage.  Her Eiffel-tower confrontation with the Master (similar to the Tennant/Simm phone call in The Sound of Drums) is peppered with a quick reference to Logopolis — “Did I ever apologize for that?” “No.” “Good.”.  The end twist also allows her to show true angst and discomfort for the first time, which we already know Whittaker as an actress can play so well.

“Has he apologized yet?”

Sacha Dhawan is a revelation as the Master.  After his calming and flirtatious turn as O in Part One, Dhawan goes full over the top, showing barely-controlled glee and barely-controlled rage all at once.  This is not the stark-raving-sane urbanity of Roger Delgado in a business suit, but nor is it the Snidely Whiplash cacklings of Anthony Ainley or I-have-no-idea-what’s-going-on-so-I’ll-just-amuse-myself Eric Roberts in the 1996 TV movie.  Dhawan’s Master is begging psychoanalysis.  Especially as the successor to Michelle Gomez’s Missy, who had seemingly become an ally at the end of Series 10, something Bad must have happened to send the Dhawan Master back down this dark path.  He takes an openly pathological joy in killing.  But why?

The writing is intelligent.  Chibnall places Babbage and Lovelace and Madeleine as pegs on a technological ladder, at which Barton, the evil tech genius who kills his own mother for having failed to ever praise him, is the unfortunate conclusion.  Ryan instructing Graham and a reluctant Yaz to smash their phones is a bit of a mission statement against the intrusive perils of modern technology.  But not all technology is bad.  Lovelace is descended from Byron, so the Doctor tells us twice, and Madeleine is a pacifist.  They have soul.  It’s Barton who lacks the humanity (in his case, literally) necessary to manage new technology.  And Graham with his tap-dancing laser shoes, a comical moment in an otherwise fairly intense story, is the essence of humanity.

The continuity references are back, after taking a vacation for most of Series 11.  We hear the phrase “artron energy” again, and I have to say, I love it any time that the much-maligned Four to Doomsday achieves immortality.

“These should eliminate the need for telemicrographics”

”
There are two possible weaknesses in this script.  One, the Nazis.  The Master heading a presumed SS patrol takes some whimsy out of the character, and the Doctor cruelly using Dhawan’s skin color against him is a bit tone-deaf, like her intentionally mispronouncing “Tim Shaw”‘s name last year.  The other is the ending(s).  The invasion plot is thwarted about seven minutes early.  With the extra time — Spyfall is the longest Chibnall Doctor Who script — we have time for two extensive denouements.  First, the episode plot concludes on a grand optimistic note, as the Doctor returns Ada and Madeleine to their home eras.  But erases their memories first, which is something we didn’t see the Doctor do even when he literally had Albert Einstein in the TARDIS.

“Answer me one question.  The fascists.  Do they win?”
“Never.  Not while there’s people like you.”

Um, not yet, not in January 2020 we haven’t defeated the fascists yet.  A little help, Doctor?

Following that, the Doctor is distracted with a crisis all her own.  The Master, in a parting video recording (in which Dhawan appears to be wearing William Hartnell’s trousers and clutching his lapels), delivers a message and a riddle.  The message, he’s the one who destroyed Gallifrey (this time); the riddle, that the founding story of Time Lord civilization is a lie.  The Timeless Child, a seemingly throwaway reference buried in The Ghost Monument (buried so deeply that I’ve seen it twice but don’t even remember it), is not what we think it is (if we thought of it at all).  This revelation is almost certainly what triggered the Dhawan Master to become so, so murderous.  How will it affect the 13th Doctor?

Now Series 12 has something that Series 11 always lacked: a purpose.  Chibnall didn’t deliver one in the Series 11 finale, but now has set a big task for himself in Series 12.  In two months, we’ll find out if he succeeded.