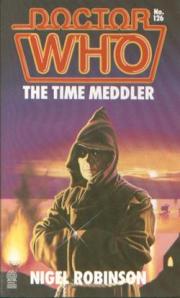 Airdates: July  1965
Written by: Dennis Spooner
Directed by: Douglas Camfield
The Story So Far: The TARDIS lands on a Northumbrian beach in late summer 1066, where the time travelers encounter a wristwatch, a gramophone,  electric lights, and a very peculiar Monk.

The Time Meddler remains a very underrated Doctor Who story.  While it’s the 8th-most popular First Doctor story in the 2009 DWM poll, it only placed 75th out of 200 overall, placing it firmly in the middle of the pack.

I confess to not understanding this comparatively poor showing.  The Time Meddler is one of the most pivotal stories Doctor Who ever aired.  It’s the first episode literally since An Unearthly Child to add something to the show’s ongoing mythology, and invents the subgenre for which the show is now arguably best known – the pseudo-historical.  And, as if that weren’t enough, it’s drop-dead funny.  Where, then, is the love?

Interestingly, The Time Meddler is almost at its best before the plot kicks in.  The opening TARDIS scene, between just the Doctor and Vicki, is marvelously quiet, with Vicki promising the Doctor she’s not about to leave the way Barbara and Ian just left, and with the two of them expressing much love for New York City.  Then,  Steven Taylor, who stowed away at the end of the last story, makes himself known, and the script suddenly gets really, really funny.  Steven refuses to believe that the TARDIS is a time machine (“IDBI – I, D, B, I – it means I don’t believe it!”) and the Doctor introduces the various features of his machine, describing them as “sheer poetry”.

Really, when you have acting performances like William Hartnell, Peter Purves, and Maureen O’Brien, all in one scene like this, the plot can wait.  Most of Episode 1 is taken up with the three regulars bantering and bickering in tandem.  From wonderful scripted lines (of a Viking helmet in the sand, “What d’you think it is, a space helmet for a cow?”), to more found poetry resulting from Hartnell losing his place in the script and recovering deftly (“I’m not a mountain goat, and I prefer walking to any day… and I hate climbing!”), The Time Meddler could have been just 90 minutes of these three chatting, and the story would still be in my top 20.

Of course, there’s more than just adding hot-headed, sarcastic Steven Taylor to the TARDIS crew.  The first two episodes of the story are called The Watcher and The Meddling Monk.  That’s referring to the same character, played by Peter Butterworth, whose comic timing is a match for Hartnell and who, in the following season, would become Doctor Who‘s first recurring human villain.  Note that he doesn’t actually say a word until well into Episode 2 – i.e. his second week in the studio.  We know early on that he’s not from 1066, with his prominent ring (matching the Doctor’s own) on display; I love Butterworth’s double-take when the Doctor tells Steven that the TARDIS, before it became stuck as a police box, once took the shape of a howdah (“A how-what?” “A howdah!”).

The Doctor, having discovered anachronisms in 1066, visits the local monastery, and after discovering the Monk’s gramophone, is taken captive to end Episode 1; the Monk’s laugh here is the first sound we hear out of him.  Episiode 2 then begins with a confident two-and-a-half-minute dialogue-free comedy sequence; the Monk cooks the Doctor breakfast, and Hartnell’s stand-in (Billy taking one of his vacations this week) tosses the food back in the Monk’s face.  This, incidentally, makes the Monk the Sideshow Bob of Doctor Who bad guys; between the toast in the face, and Hartnell obliviously flicking pebbles at his head the previous week, and the scene in Episode 3 where he charges into an empty cell and shouts “HA!”, even though the Doctor has long since escaped.

“Jet airliners by 1320! Shakespeare’d be able to put Hamlet on television!” – does the Monk’s plan really seem that bad? Really?

After Hartnell returns from vacation in Episode 3, he and Butterworth spend most of the second half of the story together.  This is the First Doctor at his peak; just give Hartnell a competent co-star with good comic timing and a strong script, and you really don’t need special effects or monsters to sustain a Doctor Who story.  Have you ever noticed the moment in Episode 4 where Hartnell disappears behind a pillar, and then walks back into shot just in time to verbally deflate the Monk?  I didn’t, not until this year.  It also helps that the Monk’s mission in 1066 is so outrageous – he plans to change history by introducing atomic cannons to the Battle of Hastings, altering the outcome of the war – giving both Hartnell and Butterworth a tremendous range of emotions to play.  The Monk gets childlike glee at wanting to “improve things” (having already contributed anti-gravitational lifts to the building of Stonehenge), or at mocking the deficiencies of the Doctor’s TARDIS,  while the Doctor gets to splutter in moral outrage at the “utterly irresponsible” Monk’s “disgusting exhibition”.  Comic timing, good script.  All you need.

There is one place where The Time Meddler drags, and that is when the background plot is going on.  There’s an Anglo-Saxon village, populated by three speaking parts and several shaggy extras, and then a few Vikings representing a modest spearhead a few weeks shy of the Battle of Stamford Bridge.  A power struggle between Wulnoth, head of the village, and Eldred, an angry villager, pads out Episode 2 but has no payoff (although one wonders if mid-1960s Doctor Who fandom started the Michael Miller Estrogen Brigade, what with Wulnoth parading around shirtless).  The Vikings that we meet are pretty hapless, and meet a gruesome end on camera once the Anglo-Saxon mob confronts them (after the Doctor’s already brained one with a club).  The best contribution the Vikings make to this story is the “space helmet for a cow” line, honestly.

One standout, though, Alethea Charlton, previously seen as a proto-feminist caveperson in The Tribe of Gum, and here playing Edith, wife of Wulnoth.  She gets a meaty role; she sort-of teams up with the Doctor, pointing him in the right historical direction when he’s trying to figure out when he is, and then helping rouse the other Anglo-Saxon villagers to defeat the Vikings.  It’s another really good characterization, and her last for Doctor Who; the actress died young a few years later. There’s one bit of we’re-never-doing-this-in-the-series-again when Edith is impliedly raped by the Vikings (and a little more than impliedly so in Nigel Robinson’s 1987 novelization of the story).  Interestingly, the Doctor comes to visit Edith shortly after this event and completely fails to comprehend what’s obviously just happened.

So, beyond the relative merits of the dialogue and acting, it’s time to talk about the two things that really make this story notable.  First is the creation of the pseudo-historical. Previous adventures involved the Doctor visiting momentous historical occasions, either from a dramatic or a farcical point of view.  Here, we’re in 1066, yes, and the Battle of Hastings is coming, yes, but we don’t meet any important historical figures like Robespierre, or fictitious but high-ranking politicos like Tlotoxl.  We just meet the anonymous Anglo-Saxons and Vikings; no King Harold, no King Hardrada, no William of Normandy.  And then, it turns out to not be a historical at all – the 11th century setting is instead the backdrop to a sci-fi/time-travel plot.  This will be the true future of the show, setting the way for future classics like The Time Warrior, Pyramids of Mars, Curse of Fenric… and also A Town Called Mercy (can’t win ’em  all).  History as a springboard to great science-fiction: something that you can do when your hero time-travels in a phone booth.

Or in a perfect Saxon sarcophagus (“A Saxon what??”)

The other wonderful thing is the Episode 3 cliffhanger.  Up to this point, we’ve known that the Monk doesn’t belong in 1066, but it’s not totally apparent to a first-time viewer that the Monk and the Doctor have met each other before.  Then Vicki and Steven find a power cable leading to the Monk’s sarcophagus, climb inside, and… it’s a TARDIS!  The Monk’s got a TARDIS!

For the first time, we meet another of the Doctor’s own people.  We’re years away from knowing that they’re called “Time Lords” and almost a decade away from learning that their planet is named “Gallifrey”,  but here it is… one of the Doctor’s own people!  The Monk brings no hint of the trauma that was obliquely hinted at in the very first episode, with the Doctor and Susan being cut off from their own people, hoping one day to return. He’s just a time-traveling Monk, looking to improve Earth history by having Shakespeare produce “Hamlet” for television (“Oh, yes, quite so, yes, of course, I do know the medium”), taking sly digs at the Doctor’s already-outmoded time machine, and acting all sad, petulant, and puppy-like when the Doctor maroons him in 1066 at story’s end. 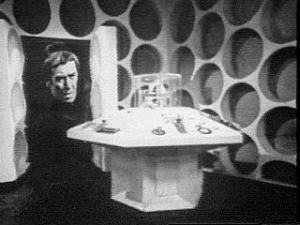 Welcome to the Dollhouse

And, of course, no discussion of this landmark story would be complete without saying a few words about Douglas Camfield’s direction.  The indoor studio doubles pretty convincingly as a Northumbrian beach; there’s a superfluous plot thread in Episode 3 where Vicki and Steven believe the TARDIS to have been washed out with the tide, but the projected storm clouds scudding across the sky are gorgeous, even in black and white, even without this story getting the vidFIRE treatment on DVD.  The confident dialogue-free stretches in the first two episodes, and the jammin’ incidental score (stock music with added percussion), show a director in total control of his work.  And let’s not forget the gorgeous shot of Vicki and Steven framed through the gramophone.

Peter Purves also makes an interesting actor’s choice, when returning an embarrassed “godbewithyou” to the villagers in Episode 2.  This could be seen as a fluff, but I’m more than willing to credit Purves with deciding that Steven, from the distant future, would not be comfortable espousing such religious sentiment.

The story, and the televised Season 2, ends with solarized images of the main cast superimposed against outer space, as the theme music plays.  A perfect grace note to a great, underrated story.

NEXT EPISODE: DR. WHO AND THE DALEKS (sigh)

An incredibly languid sojourn through the "Doctor Who" canon, with illustrations from the Topps 1979 baseball card set.
View all posts by drwhonovels →
This entry was posted in 1st Doctor and tagged 1st Doctor, Dennis Spooner, Doctor Who, Nigel Robinson, Novelizations, pseudo historical, Steven Taylor, Target, Vicki. Bookmark the permalink.

3 Responses to The Time Meddler