A Word About Pinnacle Books

Posted on January 9, 2017 by drwhonovels

There are many fans out there who collect Doctor Who novelizations in all their variants. Target may have issued 6 or 7 different versions of any given novelization, particularly the earliest ones. You might have a book like Doctor Who and the Crusaders with the Pertwee logo, the Tom Baker logo, and the neon-tube 1980s logo, and the blue-spine editions put out by Virgin books in the early ’90s (after Virgin acquired Target). And there are international editions of many of the books, too. The Finnish cover art of Doctor Who and the Cave-Monsters or the Japanese cover art of Doctor Who and the Doomsday Weapon are fantastical bits of sci-fi painting… even if they have zero correlation to the text in the book that they’re covering.

I am not that kind of collector. I have only one copy of each novelization, buying whichever one I found on the shelf first, between 1985, when I got my first books, and 1996, when I finally completed my collection with the novelizations of Horror of Fang Rock and The Power of Kroll at the Visions convention in Chicago. So my copy of The Crusaders is a powder-blue Target book with the neon-tube logo, and my copy of Doctor Who and the Nightmare Fair is a blue-spine Virgin reprint. I’ve never taken the time to “authenticate” my collection by acquiring first editions, and I haven’t bought any of the recent BBC reprints with newly-penned introductions and endnotes (though I should, I should).

Which brings us to Pinnacle Books.

Eight of the novelizations that I own are not Target books at all, but rather US reprints from an imprint called Pinnacle Books, then located at 1430 Broadway in New York, which is between West 39th and West 40th Street, just steps from Times Square and Bryant Park. This is fabulous Manhattan real estate now, though during Pinnacle’s heyday, between the late ’70s and mid-’80s… not so much.

The Pinnacle books are shorter in height than the Target books, so, when looking at my shelf from overhead, you could always tell which books were Pinnacle’s without ever seeing the distinctive black spine (very few Target books came in black, with the novelization of The Invasion being a rare exception) or the fantastical cover art. They also had a different logo, one never used on television or any other officially licensed product. And, because Doctor Who novelizations were just a small part of Pinnacle’s stable, the books contain, up front, an introduction to the world of “Doctor Who” itself, and, in the back, ads for other Pinnacle book lines — including much more lurid fare.

Pinnacle obtained the rights to ten Target novelizations starting in 1979, and released them in non-televised order. Their first book is Doctor Who and the Day of the Daleks, and their second book is from an earlier season, Doctor Who and the Doomsday Weapon. Their cover art is a mish-mash of true-life representations, and whimsical bits of imagery from an artist named David Mann.

There’s an artist named David Mann who specialized in biker art and was rather famous in his field, but his Wikipedia entry mentions Doctor Who not at all. However, the TARDIS wiki pairs up David Mann the biker artist with David Mann the Doctor Who cover painter, so I’m assuming they’re the same guy. This is likely as close as we’ll ever get to the long awaited Doctor Who/Sons of Anarchy cross-over.  Hey, Charlie Hunnam’s American accent is almost convincing as some of the ones heard in The Gunfighters … 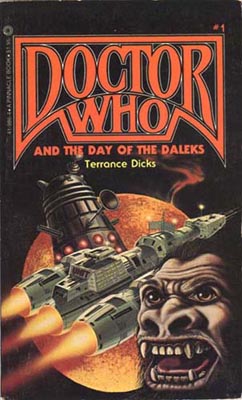 Doctor Who and the Day of the Daleks.  Pinnacle Books, 1984 reprint.

The cover illustration to Day of the Daleks is, to use a British term, lovely. There’s a photo-realistic Dalek superimposed against the sun, and passing in front of it is a UNIT spaceship, a very 1970s-looking Battlestar Galactica type of design. In the lower right-hand corner is David Mann’s painting of a fierce monkey with huge fangs – very much not what the Ogrons looked like on television. There were no spaceships in the story, either, and in the 22nd-century time zone central to the plot, UNIT no longer existed. Still, mention Day of the Daleks to any American fan or novelization collector, and the first thing they’ll volunteer in return is not the time-travel paradox plot, or the poorly-realized Dalek voices – but, rather, “UNIT spaceship!”.

The cover to The Doomsday Weapon is also a trippy montage. On the upper left we have David Mann’s portrayal of a Primitive. This Primitive has six fingers grasped around his spear; Malcolm Hulke in the novelization make sure to explain that his Primitives were polydactylic. However, on TV, the Primitives wore lumpy green masks, and Day-Glo pajamas to mask their nudity; Mann’s Primitive is pure Wild West-era Native American, with dark flowing hair and a well-muscled bare torso. 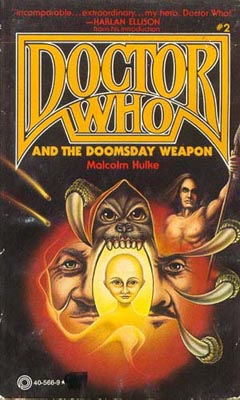 Doctor Who and the Doomsday Weapon.  Pinnacle Books 1979 edition.

In the center of the cover, though, is a …. space-rat with long, sharp, tusk-like fangs. I’ve owned this copy of the book for over 30 years and still don’t know what in the story this rat is meant to portray. It’s surrounded by a four-taloned reptilian claw with ferocious nails, which could very well be the IMC-fabricated murderous lizard (or, on TV, placid gecko). Under that is Mann’s depiction of the Guardian – a smooth-headed yellow humanoid face, whose arms and hands dissolve into flames – much nicer than the Guardian who we saw on TV, and quite possible a true depiction of what Malcolm Hulke intended for the Guardian to really look like.

As for the saturnine face split into two, on either side of the Guardian and the rat-tusks, I’ve long assumed that to be two depictions of the Master. It’s not Roger Delgado’s face, and the one on the right has a darker eye color and a much more prominent soul patch than the one on the left. But there are two flame-trailing meteors coming out of the left side, aimed straight at the left Master’s head. Look out!

The American editors to the Pinnacle series added a couple of pages of explanatory text to each edition. Which made sense – these books, British imports released by a small publishing house, sold like hotcakes; my editions of these two novelizations were fifth printings, issued in November 1984 (coincidentally, the month that I started watching the series in the first place). Five printings in five years; that will do well for you.

The Day of the Daleks novelization contains an anachronistic, 1979-eye explanation of what the Daleks are, including mention that they are the inventions of “Davros, a brilliant but crippled scientist” (you could still say “crippled” in 1979, evidently). But Day of the Daleks predates Davros, who debuted in Genesis of the Daleks (#4 in the Pinnacle reprint series). The Daleks are also described in very post-1977 terms, including this, one of my favorite paragraphs of all time:

The Daleks are hideous machine-like creatures that move on a round base. They have no human features. And they are so vicious they make R2D2 look like a simpering, lily-livered robot.

The second page is a discussion of “Doctor Who and His Companions”, although the Pinnacle capsule summary of the Third Doctor does not appear in the 1984 printings of either of these two books. Of Jo Grant, we learn:

While quite petite and very pretty, she’s also smart and is infuriated when Doctor Who treats her like a babbling idiot, which he often does.

The description of the Brigadier is meant to portray the character at his Season 7 best, although it’s less applicable to the more comical Brigadier featured in the first and last chapters of Doomsday Weapon:

The Brigadier is everyone’s idea of the typical British Officer – his voice is clipped, his manner is abrupt, and his mustache is neat. But he is hardly robot-like. In fact, he’s quite bright and his several encounters with alien species and his long and stormy association with the Doctor have made him very flexible. He’s really very fond of the eccentric Doctor but sometimes finds him very difficult to work with.

At the back of the books are ads for other sci-fi series, also available from Pinnacle. Pinnacle, as I understand it, still exists today, although they no longer publish sci-fi. But here, in glorious 1984-o-vision, is an ad for a series of Knight Rider books. Oh my goodness. Volume no. 2 in the prestigious Knight Rider series is entitled Trust Doesn’t Rust.  Which may be one of the worst titles in the history of genre literature.

The Love Machine.  I told you I wasn’t making this up.

Three more pages of post-novelization text are devoted to Richard Blade, Pinnacle’s own long-running (1969 through 1984) series of sci-fi pulp novels, a thinly-veiled James Bond type who performs his derring-do in outer space.

He’s hard as steel and an efficient killer in the British service. He’s been school in armed and unarmed combat, both ancient and modern, and excels at military strategy, espionage, and psychological warfare. One more thing: His great prowess as a lover is no secret.

And a giddy excerpt from the text of Volume no. 1:

Blade got to his feet, conscious for the first time that he was entirely naked. For a moment, the girl ran her eyes over his body and he saw approval. 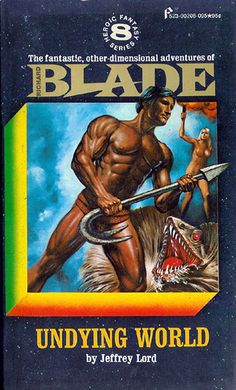 Richard Blade in Undying World.  I mean, look at the size of that thing.  The harpoon.

These three series of advertised books are a remarkable set of stablemates to 1970s Doctor Who in the Pinnacle back catalogue, and something you wouldn’t find in the pages of the Target novelizations.

One more thing to know about the Pinnacle Books editions: they feature a long introductory essay penned by Harlan Ellison, expressing his love for the series. I’m not sure that the voluble Mr. Ellison has ever spoken publicly on Doctor Who since that 1979 essay commissioned by Pinnacle, but it’s a very Ellison bit of writing. But we’ll talk about that on another day …

An incredibly languid sojourn through the "Doctor Who" canon, with illustrations from the Topps 1979 baseball card set.
View all posts by drwhonovels →
This entry was posted in 3rd Doctor, Uncategorized and tagged barry letts, Doctor Who, malcolm hulke, Novelizations, Pinnacle Books, Target, Terrance Dicks. Bookmark the permalink.

4 Responses to A Word About Pinnacle Books